Re-lentus: Women at the Crossroads of Art and Advocacy (Case: Armenia) 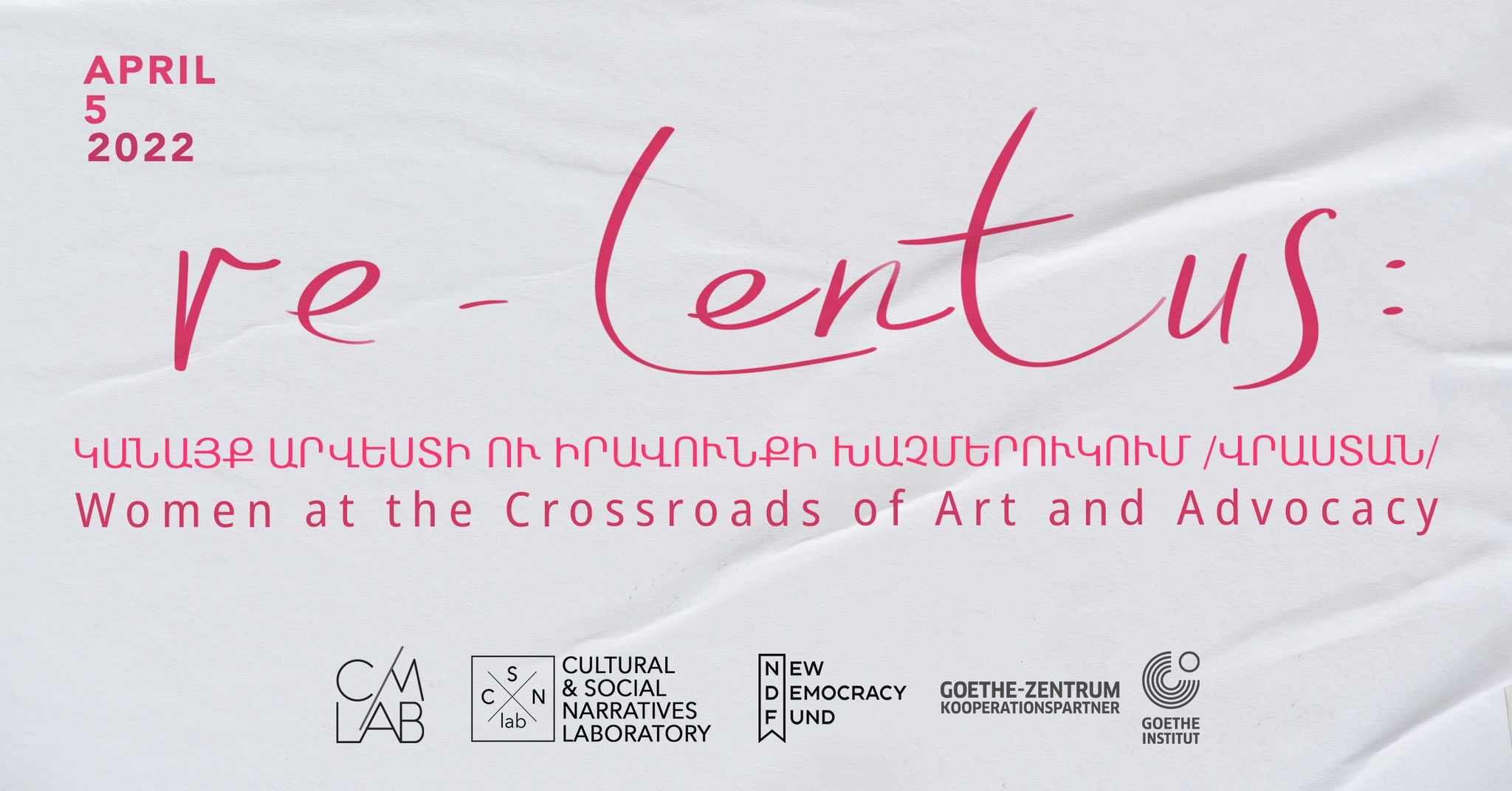 The Cultural and Social Narratives Laboratory (Armenia) and the Culture and Management Lab (Georgia) invite you to the event Re-lentus: Women at the Crossroads of Art and Advocacy. During the meeting the representatives of the culture and art spheres from Georgia will share experiences regarding their path towards the change, the challenges they face and many more issues. Presentations will be followed by a discussion and Q&A session.
Attendance is free and does not require any preliminary registration.
The fields of art and culture are deeply affected by the recently unfolded life-changing events in Armenia and Georgia ranging between a devastating war and political crisis to cultural protests and pandemics. Despite these obstacles, the artists, cultural workers, and activists continued their creative work reflecting on the present situation and the ways of future scenarios. The cultural workers and artists and among them specifically the women and other vulnerable social groups became direct subject to suffering during this period. The project and the meetings with its invited participants from Armenia and Georgia offer an opportunity to showcase the experiences of the female representatives of the creative realm including the relentless spirit they maintained during their endeavors despite all odds.
During the event which will take place in Yerevan, Armenia on April 5, 2022, at 17:00, three Georgian female artists will share with the Armenian audience their experiences of working in the times of crisis. Later they will engage in discussion and answer the questions of the audience.
The speakers representing different spheres include Natela Grigalashvili (photographer), Nino Kvrivishvili (textile designer and visual artist) and Keti Machavariani (film director and producer).
The talk will be followed by a screening of Keti Machavariani’s newest film Mziuri (Sunny).
Synopsis: The film follows Sunny, a door-to-door, in-person interviewer for sociological studies in Tbilisi, Georgia and taps deep into the social mores of both the film’s middle-aged protagonist and her subject, while tantalizing the audience’s voyeuristic urge to peer into other’s lives. It is Sunny’s conversations once inside the homes that yields a fascinating peel at a community and culture, and an insight into Synny herself. Her job is both her profession and her social life and possibly the only thing keeping isolation at bay. The title of the film – Sunny is taken from the literal English translation of the Georgian word Mziuri, Sunny’s given name. Georgia was often referred as the Sunny Georgia during the Soviet times.
Speakers
Natela Grigalashvili is a freelance documentary photographer and camerawoman. At the beginning of her carrier, she was best known for her black-and-white photography, however more than a decade ago started to take color photographs with a digital camera as well. The artist mainly works on long-term documentary projects in the rural areas of Georgia documenting the lives of religious and ethnic minorities and ordinary people who live in the villages and provincial cities. While working on the photo series she focuses on the story which is told by an image. Natela Grigalashvili’s works have been awarded numerous prizes including 3rd prize of the Direct Look Photo Contest (2019), Alexander Roinishvili Award for her contribution to the Georgian Photography (2007), Special Grant in the The Aftermath Project contest (2007, Los Angeles, USA) etc. In 2015 she established a photo agency Kontakt Photos. In parallel to her artistic work Grigalashvili in actively involved in teaching photography to marginalized groups in remote geographic areas of Georgia. She is the founder of photography clubs in Javakheti (2014), Pankisi Gorge (2015) and Adjara (2016). In 2009 Natela Grigalashvili worked as a camerawoman of Georgian movie Sergo Gotverani (director: Irakli Paniashvili).
Keti Machavariani is the Tbilisi based film director and producer. She is a graduate of the Ivane Javakhishvili Tbilisi State University, Faculty of Arts with an additional postgraduate diploma from the Shota Rustaveli State University, major in Film Studies. In 2002 she also completed studies at the faculty of Film Directing of the same university. Participant of the internship program at RAI TV in 2005-2006 (supported by the Ministry of Foreign Affairs of Italy) in 2010 she enrolled at the film training program Maia Workshops (Italy). After having produced several short films, Keti Machavariani’s feature film Salt White premiered at the Karlovy Vary Film Festival (2011) to be later screened at numerous film festivals and being awarded several prizes. In 2016 Machavariani produced another short film Georgia 1992 (based on Aka Morchiladze’s story, commissioned by the Public Broadcaster of Georgia). Her recent documentary Mziuri (2020) premiered at the Canadian documentary film festival Hot Docs where it was awarded Special Mention of Jury. In parallel to working as a film and TV producer Keti Machavariani is actively involved in pedagogical activities.
Nino Kvrivishvili is a Tbilisi based young Georgian artist who studied Textile Design at the Tbilisi State Academy of Art (2001-20017). Her recent shows include the solo exhibitions at the Museum Wäschefabrik (Bielefeld, Germany), Gallery Melike Bilir (Hamburg, Germany), Binz39 (Zurich, Switzerland), State Silk Museum (Tbilisi, Georgia) and KCCC (Klaipeda, Lithuania). Kvrivishvili’s works were included in group exhibitions organized at the Weltkunstzimmer (Dusseldorf, Germany), Museum for Contemporary Art (Zagreb, Croatia), D. Shevardnadze National Gallery (Tbilisi, Georgia), Museum of Sculpture at Królikarnia (Warsaw, Poland), Popiashvili Gvaberidze Gallery (Tbilisi, Georgia). Nino Kvrivishvili mainly works with textile installations focusing her projects on the processes of changes, investigation of history and inverting these issues in a new reality with colors, shapes, patterns and textures. Her textile works depict abstract images and are charged with new meanings. She tries to integrate history in debates and to unlock the stories including female narratives of factory and industrial workers for far longer and more dramatic discussions.
The project is supported by the Danish Cultural Institute through the New Democracy Fund.
The overall objective of the New Democracy Fund is to strengthen democratic organization of the civil society, build regional networking and people-to-people exchange of experiences, amongst civil society organizations in Belarus, Ukraine, Georgia, Moldova, Armenia, Azerbaijan, and Denmark.
https://www.newdemocracyfund.org/
The event is hosted by the Goethe-Zentrum Eriwan.
+ zu Google Kalender hinzufügen+ Exportiere iCal