Workshop „In Act and Thought – a score for 6 performers“ 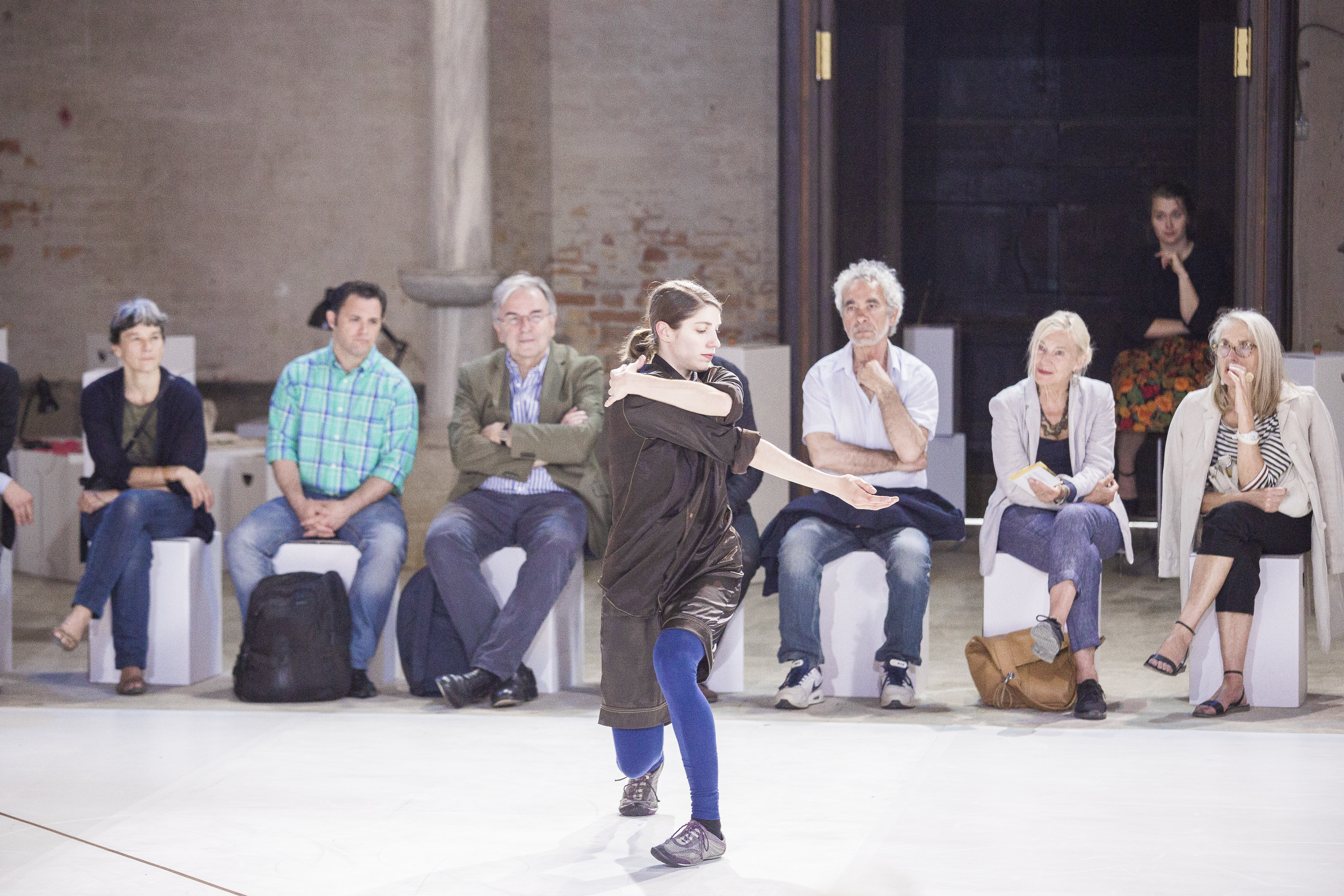 In Act and Thought

The workshop we would like to offer proposes a creative atmosphere in which we would engage in various exercises focusing on the production of real and imagined movements, How can one generate movement through the act of thinking and the thinking process through the act of moving.
Based on some of the principals and strategies used during the creation of the stage work “In Act and Thought” this workshop will give the opportunity to experience ways of combining movement with language, expanding details into complex explanations, being poetic.

Born in Pittsburgh, Pennsylvania, currently working as a Solo Performing and Multi-Disciplinary Artist and Teacher, Frances Chiaverini is a current artist fellow at PACT Zollverein Choreographic Center.  Chiaverini’s work addresses topics of female objectivity, valuation, and formalized dance aesthetics through live performance, cyber media, and film.In 2017 she co-founded Whistle While You Work, a public interface for calling out sexual discrimination and harassment at work in dance and performance-related fields.  She has conducted forums and workshops in LA, NY, Frankfurt, Essen, and Berlin. In 2014 she co-created a live residency series titled Best of America Loves producing improvised performative events in Dresden.  Frances appeared on the cover of Dance Magazine’s  “25 to Watch” in 2013.  She was a member of The Forsythe Company in its final seasons and has since worked with Adam Linder in the US and UK, is a choreographic consultant for Anne Imhof for works at MoMa PS. 1, Pompidou, Hamburger Bahnhof in Berlin, Art Basel, and La Biennale de Montréal.  In 2017, she co-created a performance series Best of Horror Loves with Katja Cheraneva supported by The City of Frankfurt Cultural Funding Grant.  Frances directs professional improvisation and compositional performance workshops internationally, most recently for the Goethe Institute in Mexico, The Venice Biennale, Pact Zollverein and The Academy of Fine Arts, Munich.

Katja Cheraneva is a freelance dancer/choreographer based in Berlin. Studied at the Nikolai Ogryzskov’s Contemporary Dance School, Moscow and at the HfMDK, ZuKT Frankfurt am Main. She was a member of The Forsythe Company from 2010 – 2015 and have worked with Anne Imhof for the productions ANGST and award-winning performance FAUST. She is a member and co-founder of HOOD(Host Organisation fOr proDuction) that is currently supported by PACT Zollverein. Since 2015 she has been active in a freelance scene as a performer, teacher and choreographer and have produced series of performances and events with Frances Chiaverini under the title Best of Horror Loves. In her work she is interested in investigating on the nature of collaboration, stressing the ideas about what is considered work in our society and challenge the notion of performance by putting oneself in an unusual working conditions and unconventional spaces. She is also involved in the development of imaginable and un-imaginable structures, as well as alternative economical systems.

Fabrice Mazliah is a choreographer and performer based in Frankfurt / Main. Having collaborated and produced works with the Forsythe Company until its closure, Fabrice has initiated a long-term research into the embodied knowledge and heritage inscribed into practitioners in the field. He is interested in understanding and renegotiating the relationship between our environment, its objects, its atmospheres, and our bodies, ourselves and its potentialities. Born in Geneva in 1972, Fabrice Mazliah studies dance in his hometown Geneva, at The National School of Athens and in the Rudra Bejart Atelier in Lausanne. He is part of the Nederlands Dans Theater in Holland before joining in 1997 the Ballett Frankfurt that transitioned into the Forsythe Company which he is part of until summer 2015 and for whom he created the piece IN ACT AND THOUGHT. With his artistic collective Mamaza he created pieces and installations like Z.E.R.O., COVER UP, ASINGELINE, EIFO EFI, GARDEN STATE, TELLING STORIES and THE NIKEL PROJECT. Fabrice is as well the choreographer of TELLING STORIES and ACME OF EMPHASIS. All these pieces and installations tour internationally and are invited to renown festivals as the Architecture Biennale in Venice, steirischer herbst in Graz, Kunstenfestival in Brussels or „Espacios Revelados” in Buenos Aires. Fabrice gives as well seminars, workshop and ateliers based on research and improvisation for amateurs and professionals internationally and for Bachelor or Master programs.