Almost a real festival and the films

Berlinale was one of the few fortunate cultural events that managed to happen at the beginning of 2021 before the pandemic would start and the world would go crazy. Back then, many of us were optimistic to believe that in 2021 Berlinale will take place in the cinemas again and will host its thousands of guests. Alas… As did the majority of film festivals, the Berlinale team made a decision to divide the program- the market took place in the beginning of spring (March 1-5), and physical screenings planned to be held open-air, are scheduled for June 9-20, 2021.

Last year almost all big festivals changed their implementation dates, program and structure. Cannes organized the market only, the Venice Biennale dared to have a physical festival, while complying with all a/logical rules of Covid-19. Meanwhile Berlinale succeeded in making something that can seem impossible for an online event – it recreated the festival mood that is always present in February in Berlin. The recipe is super simple: all films from the program (except “Fabian: Going to the Dogs” by Dominik Graf) were open for the accredited press who recreated the online festival buzz through their social media channels. Since there were no availability limitations based on geological location, hundreds of films critics could join the event from various ends of the world and made it attractive for the audience. The jury for the main competition of the festival was also special. Directors who had won a Golden Bear in the last 6 years, were invited to select the best film of Berlinale 2021. Among them were Ildikó Enyedi (Hungary), Nadav Lapid (Israel), Adina Pintilie (Romania), Mohammad Rasoulof (Iran), Gianfranco Rosi (Italy) and Jasmila Žbanić (Bosnia and Herzegovina). This directorial team made a wonderful selection, handing the main prize to Radu Jude for “Bad Luck Banging or Loony Porn”, which had already caused many discussions because of its controversial title. However those who are familiar with the oeuvre of Jude, are perfectly aware that making judgements based on the title is a bit naïve and with just a little patience, Radu Jude will give answers to all possible questions. A little political scandal was inevitable even for the online Berlinale. This time it developed around “Black Bach- Artsakh”, a film by Ayreen Anastas (Palestine) and Rene Gabri (Iran), which was included in the “Forum: Expanded” program. The film that has captured the lives of Armenians living in Artsakh, raised a complaint from the Azerbaijani side, which demanded to remove the film from the program. But the organizers refused to do this and published a statement that “silencing the voices of the filmmakers is not the way forward”. They invited everyone to take part in the physical screening of the film in June and the panel discussion afterwards “to be engaged in constructive dialogue”. This move by Berlinale could be a perfect example for many festivals around the world, including Moscow International Film Festival which removed the film of Armenian director Jivan Avetisyan, “The Gates of Heaven” in October 2020 after receiving complaints from the Azerbaijan Embassy.

To summarize Berlinale 2021, I have selected 5 films, one from each major program of the festival. 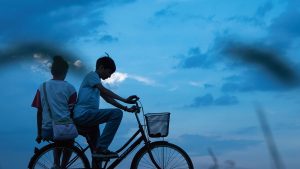 The “Generation” section, which focuses on the films that depict teenagers as equals, has become a perfect showcase especially for young filmmakers making their first steps in film industry. This definition wonderfully fits Han Shuai, whose debut feature, “Summer blur”, received the main prize in the section.  The film had its premiere last year in the New Current (International competition) section of Busan International Film Festival and tells the story of 13-year-old Guo who starts facing the difficulties of adult life much earlier than she should have. The death of a classmate, the sense of guilt, yearning for mother, the fear of loneliness and the revelation of her own sexuality are encompassed in eighty eight minutes when the girl gets older right in front of our eyes. Despite the fact that this is the first role of the young actress in cinema, she succeeds in creating a non-conformist wild creature on screen that is not able to adapt. Han Shuai pays special attention to gender issues, while clearly demarking male and female characters. None of these characters are plain, they are presented with both good and bad features, which works perfectly script-wise. Aside from the character-building and screenplay merits, the film has noteworthy camera work – the hand-held camera becomes Guo’s gaze on the world which helps the audience to understand her more deeply.

Originally from Mush, Ferit Karahan presented his second feature, “Brother’s keeper” in the Panorama section of Berlinale 2021 and received a special prize from the FIPRESCI jury. The film tells the story of two Kurdish boys, Yusuf and Musa, students in a remote boarding school situated in the mountains of Western Turkey. The dedication of the boys to each other is contrasted with the irresponsibility and cowardice of the teachers and the direction of the school, which results in a tragic outcome. The camera work amplifies the tension on screen – close up shots of nervous and handsome black-eye teenagers, abrupt editing and the complete absence of music ideally combine with fierce winter scenes and make the audience to feel tremor and uneasiness. The director used to be a student in a similar boarding school and is perfectly aware of the severity and rudeness common in schools like this. In the film, he succeeds in transferring his hatred towards injustice and impunity to the audience. Though Karahan strives to build the story around Kurdish identity, intending to contribute to the establishment of independent Kurdish Cinema, the influence of Turkish masters, such as Nuri Bilge Ceylan, Semih Kaplanoglu and others is more than evident. Meanwhile the film would only benefit if it is positioned outside of Kurdish question. In that case, “Brother’s keeper” would become a tale of felonious negligence, power correlation, and most importantly friendship and care. 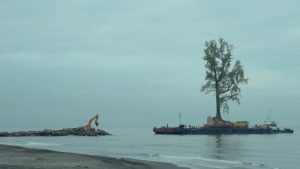 Armenian audiences are familiar with Salome Jashi since 2013 when her debut feature “Bakhmaro” was screened in the frames of Golden Apricot Yerevan International Film Festival. Her next film, “The Dazzling Light of Sunset” received prizes in numerous significant documentary film festivals. The premiere of “Taming the garden” took place in January, 2021 at one of the most outstanding film festivals of the US, Sundance International Film Festival. Later the film was selected for the “Forum” section of Berlinale. Surrealistic from its very first frame, the documentary follows the movement of a huge tree (as tall as a 15-floor building) through the village, then the sea, until finally it finds “its place” in a garden. The garden is owned by the most powerful person in the country. It’s undeniable that Salome Jashi has made a political film while staying loyal to her personal observational style. But this is only the first layer of the film. The other layers are more individual, also universal. Anamorphic shots of the camera have meditative influence on the audience that not only makes them think about power, omnipotence and permissiveness, but also brings back their childhood memories, fosters thoughts on correlation between the nature and men, on losing the roots and estrangement. Almost without any dialogues and perfectly esthetic, the film is an ecological, political and sociological masterpiece which turns into an artwork with multiple symbols. And each of us has their own key to decode it.

“The girl and the spider”, dir. Ramon and Silvan Zürcher 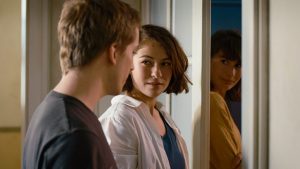 The debut film by Swiss brothers Ramon and Silvan was screened at Berlinale in 2013. “A little strange cat” was an episodic story from a daily routine of a family nested within four walls of the apartment, in the narrow corridors and sunny rooms full of household items. After eight years the brothers are back to Berlin with their sophomore feature, “The girl and the spider”, the second part of the planned family trilogy. The film that brought the Zürcher brothers a prize for best directing, is realized in the same episodic-tale style and depicts Lisa’s last day in the apartment, which she shares with Mara. The boxes are collected, Lisa is ready to move to a new apartment and Mara is getting ready to face the loneliness. But not today, today the human flow to the tiny apartment is not going to end: parents, friends, neighbors and their pets, old and new lovers enter and leave the small door to create a cobweb of complicated relations. And every time when it seems you are completely lost the tracks of these stories, the melodies of “Voyage, voyage” remind you about inevitable separation. Meticulously crafted characters, their short and at times empty dialogues, character-centered cinematography and the sunlight pouring from the open windows create an atmosphere of calm routine, which also brings a mild uneasiness that predicts a rearrangement of the events. Within already established personal style this tragicomic drama warms with its simplicity, like the sun in the balcony, but reminds us of the unavoidable end of everything, which fortunately, may become a start for something new. 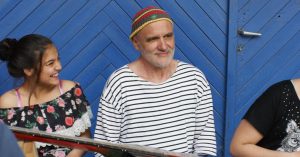 One of the most anticipated films of the festival, “Mr. Bachmann and his class” was liked by everyone who watched it. The film director Maria Speth has already caught the attention of film critics while presenting her previous films in Rotterdam, Leipzig, Mar del Plata and other international film festivals. In Berlinale 2021 Maria presented her documentary film spanning three and a half hours and was awarded with the Silver Bear. The film follows the ex-revolutionary, folk-singer and sculptor Mr. Bachmann and, of course, the class routine of his students. The school, where Mr. Bachmann works, is situated in Stadtallendorf, North Hesse where 25% of the population does not have German citizenship and 70% have an immigration background. The reflection of this multiethnic population is obvious in the class, the students come from Turkey, Morocco, Bulgaria, Russia, etc. Through the lens of Maria Speth we find ourselves in the classroom with the opportunity to meet the children, listen to their thoughts about migration, history, love, friendship, racial, sexual and religious minorities, learn about difficulties they are facing. And all this is happening thanks to pedagogical methods of Mr. Bachmann who creates an atmosphere where even the students who don’t speak German can integrate. He listens to them, asks the right questions and helps them to open up, to uncover their strong points. The merits of “Mr. Bachmann and his class” are the simplicity, honesty and sincerity that the director achieves to express in the film. She integrates her camera in the classroom so well that it does not bother neither the students, nor the teacher. The last but not least asset of the film is the editing: due to the skillful work of the editors we don’t even feel that we are in the classroom for three and a half hours.